He needs your help against the fascists

Bertell Ollman, a professor of politics at New York University, appeals for solidarity on behalf of a Greek scholar facing legal threats from the fascist Golden Dawn party. 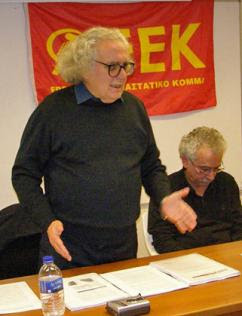 Savvas Matsas
SAVVAS MATSAS is an exceptionally talented Greek philosopher, literary critic and Biblical scholar who is also the leader of a Marxist political party, the Workers Revolutionary Party (EEK, by its initals in Greek), in his country. He is very well known in left circles in the U.S., the U.K. and France for his invariably enlightening and spirited participation over the years in a variety of our conferences and seminars.
Today, Savvas stands charged with "defaming" the Greek neo-Nazi party Golden Dawn--whose brutal assaults on immigrants and others most of you will have heard about--"inciting violence" against them, and "disturbing the peace." His case goes to trial on September 3. The evidence for the charge of "defamation" seems to be that he called them "criminals"; for the charge of "inciting violence" that he appealed publicly for a fight against fascism; and for the charge of "disturbing the peace" that he wrote a tract calling for a demonstration against them.
Meanwhile, the Golden Dawn party, which continues its rise on the Greek political scene, has been conducting a virulent campaign against Savvas, whom they've called "an agent of the international Jewish conspiracy against the Greek nation who is trying to provoke a civil war in order to establish a Jewish-Bolshevik regime." Sound familiar?
Perhaps as outrageous as the charges against Savvas is the fact that Greece's conservative government, which has several cabinet members whose origins lie in the extreme right, should consider such legally protected behavior as worthy of judicial action. This may even be the first time that any country that pretends to be a democracy has made opposition to fascism into a crime, and if it succeeds in Greece it won't be the last.
Savvas has called for letters that support his "right" (I would have preferred "duty") to fight fascism in all the ways listed in the charges above be sent to him as soon as possible. The trial, again, is on September 3. Even one line will do. Letters are already beginning to flood in from Greece and several other countries.
We have a chance to make a difference here--for Savvas, perhaps for Greece, and maybe even for ourselves. Take a moment right now and write, and then forward this appeal to all your contacts who take--or should take--the fight against fascism (and the state's protection, bordering on open support, of the fascists in its midst) as seriously as Savvas does.
Savvas' e-mail address is savvasmatsas@gmail.com.
In solidarity,
Bertell Ollman
Department of Politics, New York University
Posted by Unknown at 2:31 PM